On the evening of 25th February, sixty people from industries across the UK’s business landscape gathered at sustainable members club, ARBORETUM to answer the question, ‘how do we design products for people and profit?’.

The event, hosted by Somo in partnership with network and media company One Question, carefully curated a panel of industry experts to act as the catalysts for a wider discussion with the audience; debating the question from a brand, health and innovation perspective to create a way forward.

As businesses, we're all under pressure to deliver on this idea of being able to stand for something bigger than the bottom line. The rise of ESG (environmental, social and governance) — which is fundamental now in many investment negotiations — and B Corporations ‘doing well by being good’, indicate that if we are not buying into purpose-driven business, then it is going to be very difficult to be a sustainable organisation. The debate surrounding the evening’s question sort to establish how we do that.

Founder of One Question, Sarah Parsonage kicked off the proceedings, from a brand perspective with Lisa Hogg, Former Director of Marketing and Giving at social impact shoe company, TOMS and Craig Hepburn, Head of Digital Transformation at UEFA (the governing body of European Football). Short-termism is something that came up. Short-termism as an industry and as a society is causing an imbalance in what we say we want — the purposeful products we say we believe in, how we want to save the planet — and the rise of wanting quick 24hr delivery. We’re ruled by our desires to have something fast and this is on the rise.

As marketers, it’s a challenge to balance the idea of short-termism. The pressure to develop performance marketing strategies (discounts, quick wins and KPIs) and maintain a viable business that is still trading in five or ten years.

“Companies can choose to show up differently in the face of short-termism”, said Lisa. “In times of economic downturn consumers gravitate back towards heritage brands that are iconic and have a sense of stability”. Lisa’s view was that the consumer’s short-termism was perhaps fueled by wanting stuff quickly to fill the emotional void. “So when the world feels like it's going to hell in a handbasket, it's just like, ‘well, this is going to make me feel better’. We can find other ways to make people feel better”, she offered.

Lisa gave a word of caution not to assume that purpose alone will bring customers and drive profit. It must be balanced, “Connect the purpose of your company with the people in your company as well because your employees are also consumers, they’re people so I think it needs to be much more holistic than some companies consider”.

The other side of short-termism that Lisa raised as an issue was discounting. Brands are discounting themselves, retailers are discounting to clear stock and not repurchasing the next season. “Not only does it destroy your margin, it doesn’t make financial sense. It's this instant gratification of ‘it'll help us hit our revenue now’. But if you actually look at the profit when you sit and look at the spreadsheets at the end of the year, you realise that probably wasn't such a good idea”, she said. This evolved into questions about growth and shareholder value. ‘Why does growth have to be double-digit, with the need to be richer? Why can’t it get to a sustainable level that’s enough and stay there?’, Lisa asked.

Craig felt the culture of buying things, wearing them then throwing them away is changing. Society is changing but he sees a big issue with the media. “They're telling the other story — ‘buy more stuff’. So there's a real battle going on in terms of what's the right message that needs to be put out there”.

Some might say it’s easy for companies like TOMS to talk about people and purpose because that is how it began but any company can look at its core values and act. “Create impact not just raise social consciousness”, rallied Lisa. “That might mean taking just ten per cent of what you spend on sponsorship or sports marketing and putting it to something that matters. No more easy way outs. It takes collective impact and Governments taking account because without them they’ll be too much red tape every time. So, we need Governments, companies, people, organisations all putting more skin in the game. Stop coming up with excuses”. 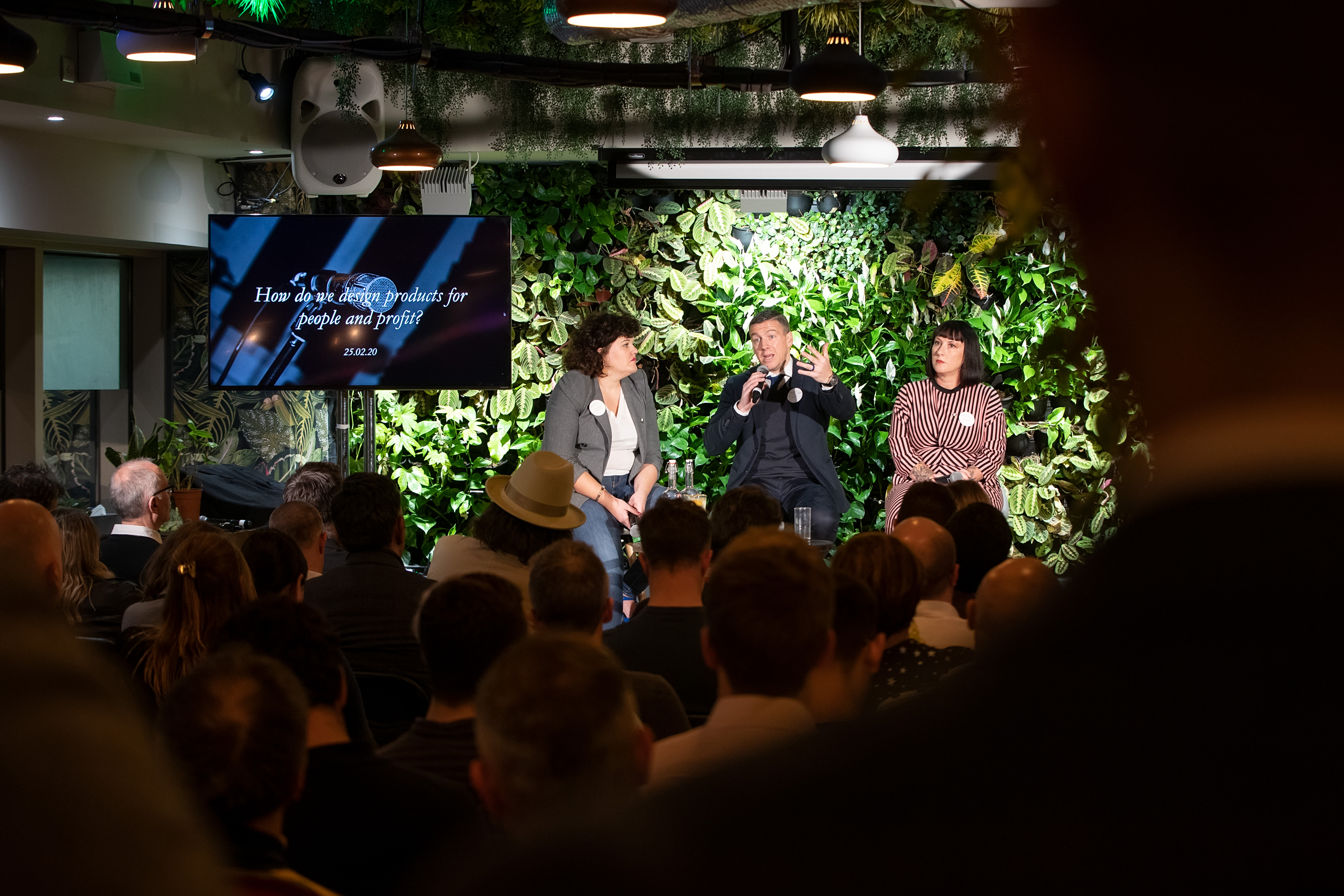 Next to the stage was Somo’s Chief Strategy Officer, Ross Sleight in conversation with Milan Bates MD, Cardiothoracic Surgeon at Bristol Royal Infirmary; a respected heart surgeon and leading expert in medical robotics and the use of surgical robots, alongside Ben Ryan, Director of Glaze Prosthetics; designer of unique prosthetic limbs engineered for kids.

“Working with families is the key to product innovation in niche areas of healthcare, rather than being a top-down industry thing where a designer has an idea and then tries to make that fit. It’s better to get feedback or let the child set the design brief, in my case”, said Ben. Milan agreed. He has a digital product designed to aid smooth communication between patients and clinicians that he is trying to deploy within the NHS as well as surgical dressings inspired by nature that he has developed based on his own experiences with patients. “That’s how you create your product. Just listen to these kids, these creators, to people really. Seek together and see what they want, how they see the world around themselves, not me”.

The rate in which digital tools and services will be rolled out within the NHS will ramp up considerably in the next four years. In reference to the millions of pounds being spent by the NHS on machine learning, for example. Milan said, in comparison to some of the negative headlines, he sees a lot of enthusiasm for digital however there is also caution because these investments are public money. He doesn’t believe that the NHS is cynical about digital, just cautious. There are boxes that must be ticked and so the simple steps happen but the bigger leaps don’t because of fearing the responsibility of being labelled as the person that ‘lost’ £10 million by not investing it well or making mistakes. Ross offered that the response needs to be that healthcare invests in things that are sustainable. There might be mistakes along the way but you can pivot. 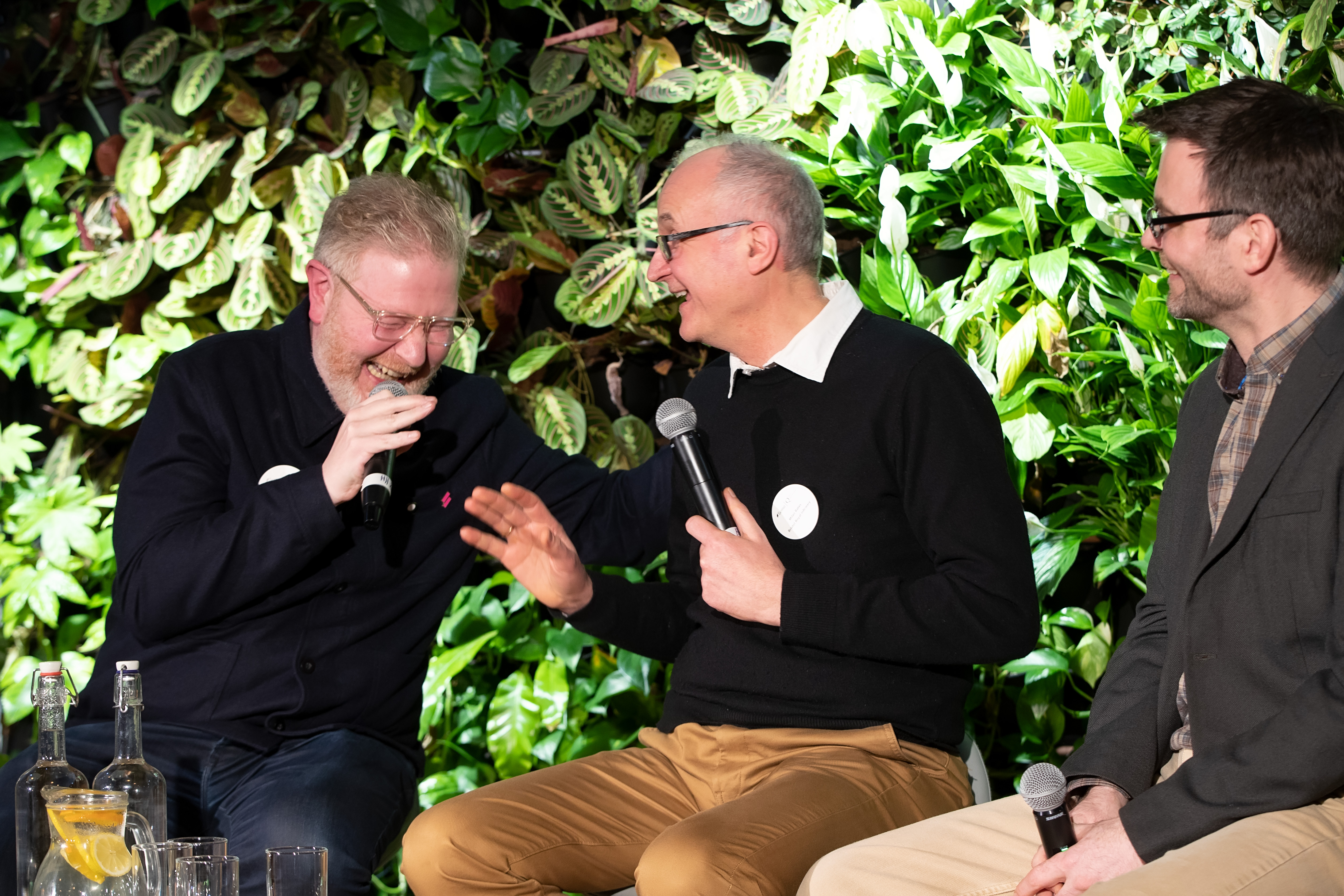 The overarching debate was brought to a close with the innovation perspective lead by James Scroggs, chairman of suicide prevention mental health charity, CALM (Campaign Against Living Miserably) in a conversation with Katie Vanneck-Smith, co-founder of Tortoise Media; the new global slow-journalism newsroom and Matt Hart, brand Innovator; a pioneer of modern brand and fan innovation for global clients including American Idol, BBC, Cisco and Spotify.

Both Katie and Matt were in agreement that innovation 100% starts with people and only then do you get anywhere near thinking about products.

“In the old paradigm of twentieth-century businesses, you would think about ‘the role of a consumer in your idea’, i.e. customer-centricity, bringing them in and getting close. And I think the transformation we're going through and arguable have come out of is ‘what is the role of my idea in their lives?’. And certainly, when it comes to purpose, that framework starts to open up much more interesting questions”, said Matt. Understanding behaviours and exploring what people are actually doing. He added, “Any behaviour lens you put over a target population that you're trying to engage with will surface these set of behaviours that describe engagement”.

When it comes to scaling a business in the right way, Matt reminded us that it’s called a “fanbase” for a reason and building that base first and then scaling from that will help you to avoid being a one-hit-wonder in a culture that is moving so fast.
​“I think that we have forgone a little bit of time, energy and thought for the sake of speed”, Katie offered, “So people often mistake innovation for speed. ’Let’s be fast to fail’ - the language of our industry has become ‘innovate with speed’. And actually, I don't necessarily think that is the right way to think about how you scale. We all want things faster, but actually, sometimes it takes longer to actually have the answer”, she conceded.

A society that is able to meet its needs through non-material ways, has a much greater chance of living in a more sustainable way. So the innovation for brands in a purposeful world, needs to be less hung-up on material products, with the question instead being ‘what is the role of technology?’ or ‘how can we adapt or evolve physical elements?’, Matt insisted. Innovation in its role here, becomes about meaning.

So the message we heard from this last conversation was that the “short-termism needs to only be aligned with iteration,” concluded James “And the long-term is actually where true innovation will find its value point in the future where profit is going to reside and balance sheets will be affected. Short-termism is not being afraid to fail and listening to your audience and working with them as co-creator”. Katie agreed, “And I also think, in the short-term, we're gonna have to make some very difficult trade-offs with pension funds and short-term pension growth whilst we allow people to think about how they reinvest money into innovation”, she highlighted.

Matt added, “Shifting to a circular economy where sustainable development goals end up on pack, so the consumer, a fan, the audience, will choose you because they remotely understand what the colour labels on that pack mean and therefore the provenance of a product, etc. There's massive work to be done. And that is a short-term thing to be taken care of”.

A prevailing theme of the evening was the idea of trust from the consumer, the user, the patient etc. Innovation needs to be long-term. If we design for people, we get a longer-term view that should provide profits. Admittedly, this is easier for independent companies so for institutions we may need regulation to help us remove the short-termism. Included in fueling this change is a whole ecosystem of investors, pension funds, shareholders, and education. It’s going to take us all moving towards a more sustainable way of doing business.

Funding models won't change overnight as there’s 50+ years’ of profit driving shareholder value. Investors are 'saying' people, however, the ecosystem including pension funds, institutions and pension-holders don't understand where these investments are made. They can’t be divested and so people have to ask the businesses and shareholders that our pension funds are invested in to change. How do we design products for people and profit? Thoughtfully. 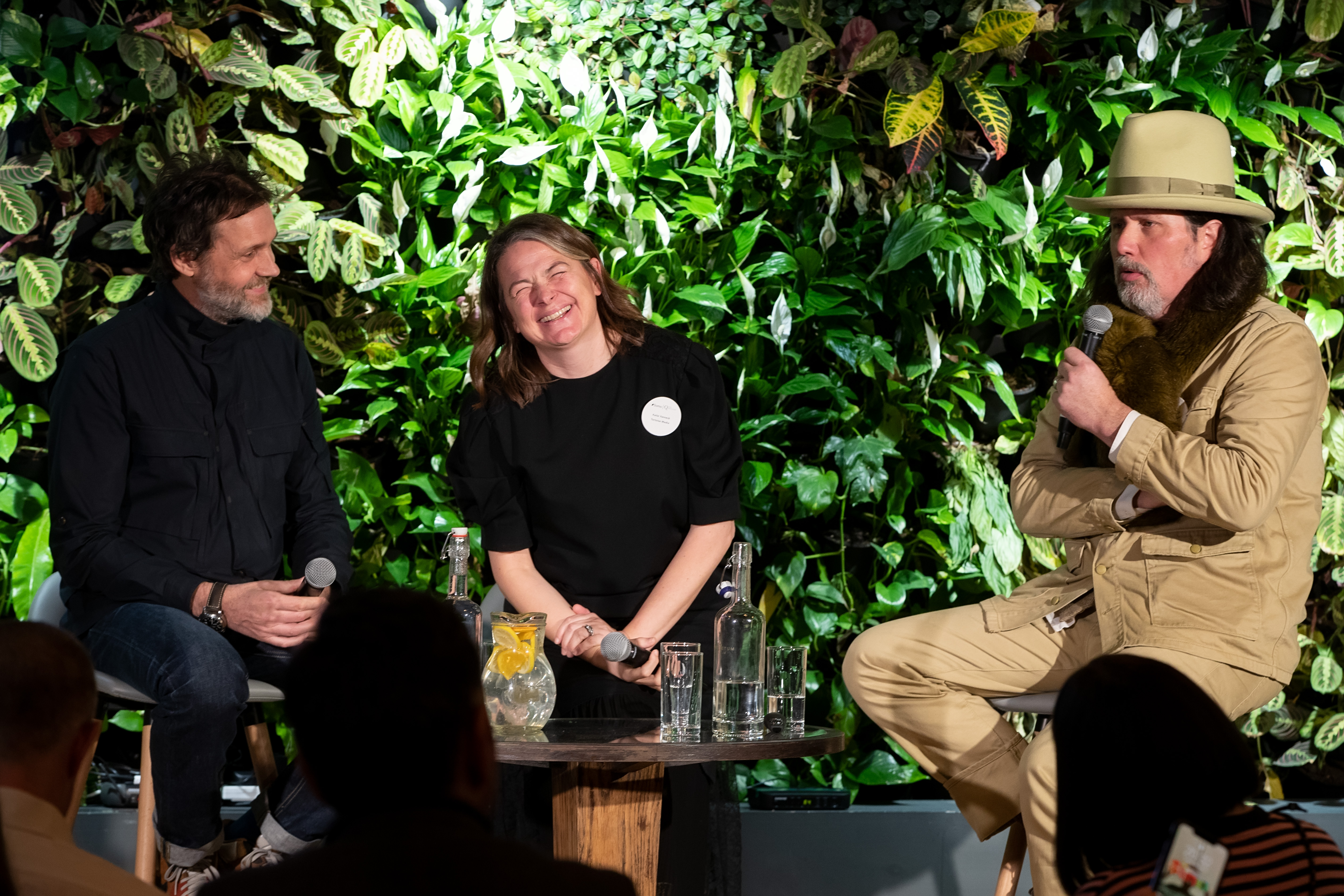