Who will win the voice war: Alexa or Hey Google?

The momentum has been building with the drive for distribution of Google and Amazon’s own devices. Google stated that since 19 October it has been selling a Google Home device every second and Alexa is rapidly becoming more and more dominant in the home. Ovum forecast the native digital assistant install base to grow from 3.6 billion in 2016 to 7.5 billion active devices by 2021, including smartphones, tablets, wearables, smart home devices, VR headsets, TV sets, set- top boxes and media streamers.

As CES draws to a close for another year, and with such dominance around the personal assistants and their success built on the use of voice, we saw Google Assistant and Amazon Alexa dominating tech on display, finding their way into new and exciting applications.

This includes the first 4K projector with Alexa and a whole new set of smart display products integrated with Google Assistant.

What Google and Alexa have recognised is that staying within their own guarded product lines actually stems from their distribution and reach as voice as a platform. To take the lead in market share of voice as a platform they have recognised that they need to integrate into all consumer ecosystems, whether that be in third party devices and products or their own. This integration is a key strategy for both of them in the way to dominate voice.

For many consumers, particularly in the US, Amazon was the pioneer of the digital assistant with Alexa aiming to be more human and play a central role in the home. But does Google Assistant have a lead to take dominant market share purely on its distribution stakes?

The pace of innovation set by Amazon is staggering, with new devices and partners appearing monthly, but Alexa has its limitations: it has very little presence on handsets (versus Siri and Google Assistant) and currently only speaks English and German.

So we question if Alexa lacks scale even with a strong partnership strategy. 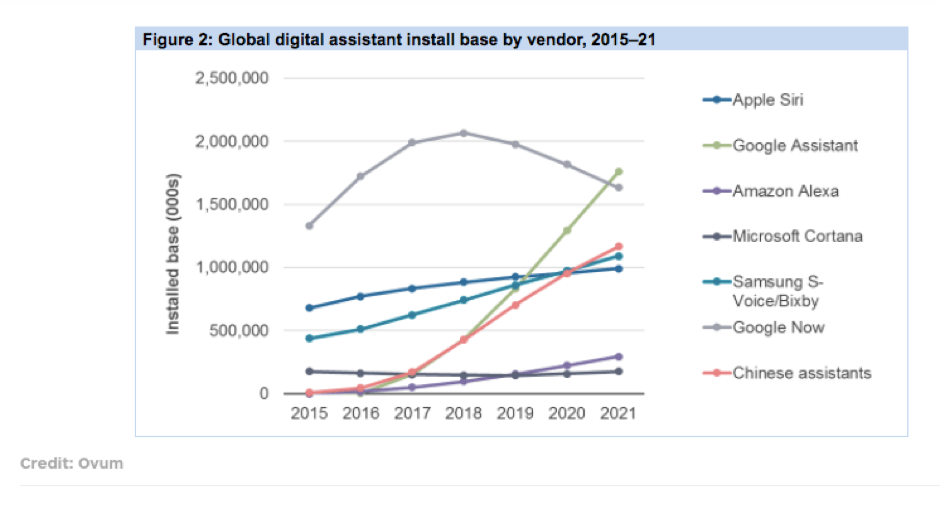 If we are to believe these stats from Ovum the presence on Smartphones will very much correlate to install based, meaning Google Assistant will win.

Google Assistant has Google’s own branded device push with Pixel and Home along with key partnerships with premium smartphone vendors like Samsung and LG and this will help grow the Google Assistant install base to nearly 1.8 billion devices in 2021.

But before we announce Google the winner, let’s take a step back and understand why voice dominated CES and what the incentive is to own this space for Google and Alexa.

For Google it’s all about preserving its dominant position in search. Google monetises search through display advertising which doesn’t exist in a pure voice-based user interface (i.e. no display). Google would go out of business tomorrow if everyone suddenly decides to shift their searches via smart speakers using voice-based queries. And we see from research recently conducted by Accenture that of those using voice 56% search less on a mobile device compared to using voice search.

For Alexa it’s about the opportunity to become more installed through increased touch points to its user base. Alexa is in an interesting position with a broader demographic reach, with high levels of engagement from children through to seniors.

The velocity of development in voice comes in line with a user experience shift to humanisation of interfaces, as voice and gestures break down usability barriers and interaction becomes more natural. This increase in humanised interaction and devices like Alexa and Google home has actually deferred interest from smartphone time domination.

There is some interesting research from Accenture that states:

​Smart speakers will continue to encroach on functionality that had, until recently, been the provenance of the smartphone. And looking to make itself an indispensable part of a device owner's daily life.

But how smart are these virtual assistants?

Is the focus at the moment going to mature where the real war is more about the personal assistant moving from the 2 or 3 simple menial tasks that is used for today and actually be an interface for digital and the web? Which is where Google will hold its own, as this is more about the development of AI, where Google already has a deep skill set.

Whatever the future holds we know one thing for sure: it’s going to be interesting as new entrants come and new focuses are developed as voice assistants recognise that in order to be everywhere, they need to be in everything.